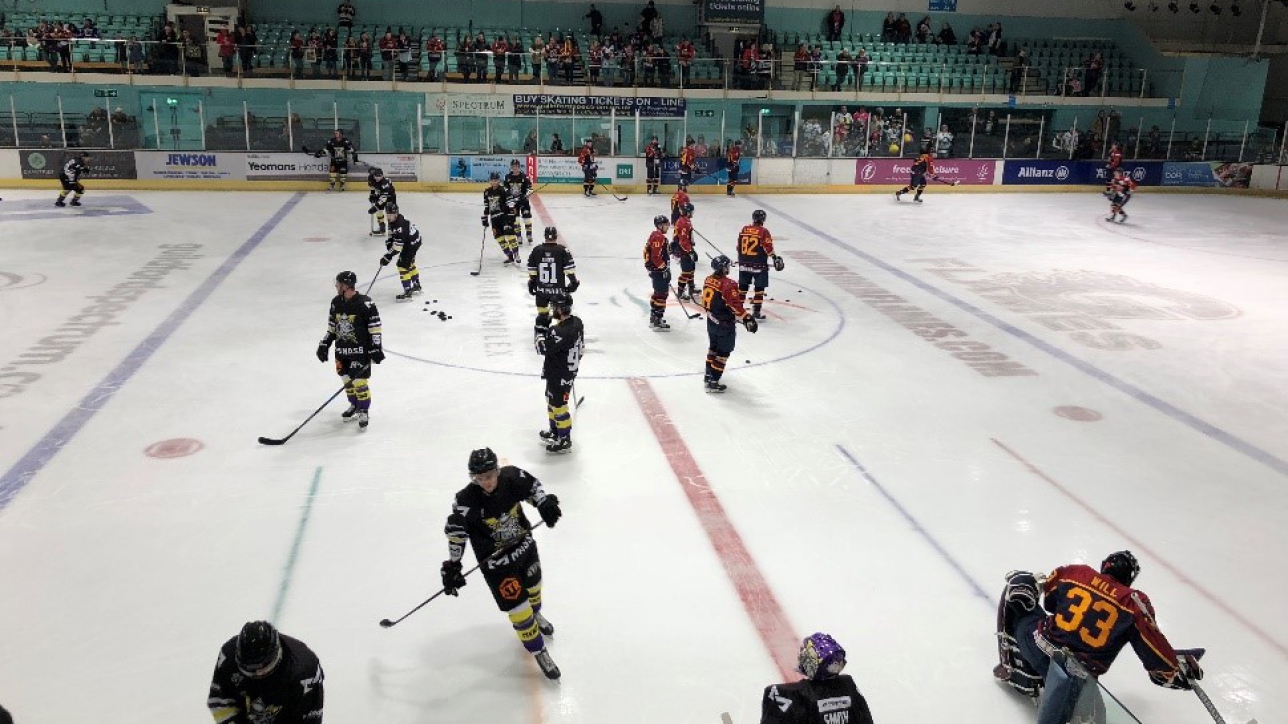 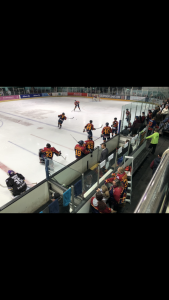 It’s fast, it’s physical and it’s entertaining. Ice hockey is played professionally by teams of 20 gladiators. In the United Kingdom and last season the overall attendance for the Elite League reached just under one million. With so many fans attending why is there no national media coverage of the sport?

Martin Lipton, who is the deputy sports editor at The Sun, said; “Most of the sports section is taken up by football and other popular sports such as cricket and horse racing.” Now with the winter Olympics the paper is currently covering more winter sports.

He called ice hockey “niche but also doesn’t sell itself well, with a limited audience and if hockey was to get better and qualify for the Olympics they may get more national coverage.” in his 20 years as a journalist he hasn’t seen an e-mail from any ice hockey body, unlike netball and basketball which send him articles weekly.

Ice hockey in the UK hasn’t really had much success over the years, but the sport has a rich history in Britain, and undoubtedly had the best success in the 1920s and 1930s when the Great Britain Men’s Ice Hockey team won gold at the 1936 winter Olympics in Germany. Lipton said; “The British Ice Hockey team that won gold in the winter Olympics in 1936 was a team made up of British born Canadians.” British Ice hockey is also a founding member of the International Ice Hockey federation.

Ice hockey in the UK is the largest indoor spectator sport and is the only team sport to have a United Kingdom-wide league with at least one team from every nation.

Keira Evans-Determan, who works in marketing and communications at the Cardiff Devils, suggests that hockey attendance was overall bigger than Conference football which is the 5th league in the football pyramid. The 12 team league has four Scottish, six English, one Welsh and one Northern Irish club’s representative in the Elite league the sports professional league.

Craig Anderson, Media and Communications Officer for the Elite League explained that the hockey experience is not just when you “buy your ticket and watch the game. It’s much more than that. The match day experience has three periods of exciting fast paced hockey. Then during the intermissions clubs put on shows, offer fan interactions such as chuck the puck, Zorb football, prize giveaways and an end game match presentation.”

Fans can also buy merchandise, grab a bite to eat and also a drink from the bar and in most rinks, you can take your beer back to your seat unlike some other spectator sports.

Ian Ludgate, who is a season ticket holder for Guildford Flames, was playing ball hockey behind the E block stands during the second intermission. He recalled his first memory of a hockey game; “My dad won tickets in a radio competition on Eagle Radio about 25 years ago and I have been coming here ever since.” Ian says the speed; skill and physical side of the game was the main draw for him to keep returning as he was a keen rugby player and enjoyed the physical element of the sport. 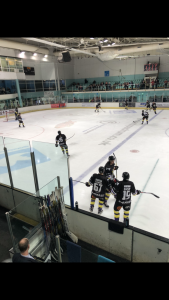 After the Guildford Flames VS Manchester Storm which was a promotional game (kids go free) on Sunday run by the local radio station Eagle Radio. Richard Krough a player for the Guildford Flames who was in the tunnel at the end of the game said that the Club does lots to get exposure by meeting fans over the Christmas period and on the off season. Krough also said; “The Flames have local exposer though Eagle radio with events like tonight when kids go free, I do however think the sport can do more to attract more fans, through advertising or national media exposure.”

Ice hockey has had its share of national exposure through the media. When BBC Grandstand was on the TV, ice hockey used to have highlights of the game shown on the show. However Grandstand was stopped in 2007. Since then the Elite League which was founded in 2003, has been shown on Sky Sports and Premier Sports, which was only accessible to fans who paid the monthly subscription to the TV service providers.

The Elite League is currently no longer on TV, whereas there is coverage of the National Hockey League.

The National Hockey League is the main league from the United States of America and Canada. These games are shown on Premier Sport and Free Sports.

Free Sports is a new free to air sports channel available in the UK, However the NHL doesn’t get any national paper coverage in the United Kingdom.

Anderson is disappointed that Ice Hockey doesn’t get the national coverage it may deserve and whilst talks are still ongoing to see if a TV deal can be struck, the only exposure ice hockey gets is through local media or from the internet.

The Elite League this season expanded the league from 10 teams to 12 and an overall attendance of just under one million last season the overall attendance is surely set to rise and hopefully the popularity of the sport can keep growing. Anderson says: “With the growing popularity in the sport and that national media outlets will start to pay attention to this entertaining sport.”